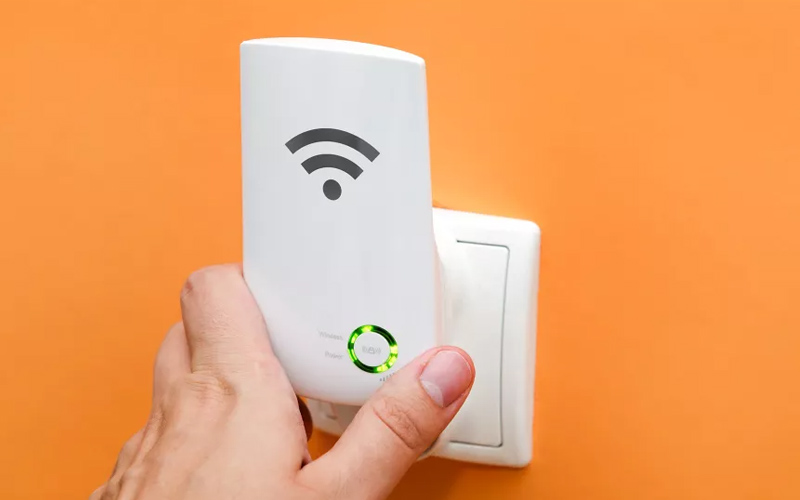 Our daily lives are very dependent on the internet and smart devices, therefore, getting reliable and fast Wi-Fi around the entire house is extremely important at the same time it can also be a challenge. You might be facing a dead zone in a bedroom upstairs or in your basement where your kids want to stream a movie, or maybe the signal drops in the backyard. This can be due to insufficient W-Fi signal! Considering all the devices, appliances, and architectural features that may cause interference in your house, sometimes even the most powerful Wi-Fi router can miss some spots, leaving them with low signal.

Wi-Fi Boosters expand your Wi-Fi system’s coverage area by amplifying the wireless signal and broadcasting it into the desired areas which results in eliminating the poor internet in your home or offices. Different types of Wi-Fi booster models are available which vary in design, range, amplification power, and frequency band usage.

Wall Plug or Desktop Design: Some boosters can be simply plug-in to a power source and are great for improving the signal, while others can be placed on a desk, table, or shelf and use stronger external antennas that can improve the signal in multiple rooms.

Range: Most routers have a range of 150-300 feet and any device used outside this range can experience connectivity issues. So on an average boosters can increase the range by 300-2,000 ft.

Wi-Fi boosters connect to an access point, such as a wireless router or hotspot, grab the signal being transmitted by the access point and amplify it for better use. Some boosters are coupled with stronger antennas that help broadcast the signal further and cover larger areas and hence the placement location of the Wi-Fi booster is extremely important. You can place it close enough to the access point to receive a signal, but also far enough to cover the problem areas. Basically, look for the area that doesn’t have a strong Wi-Fi connection and plug the booster into a wall outlet somewhere in the middle, between the target area and the router.

Most Wi-Fi boosters have simple setup processes which utilize the WPS (Wi-Fi Protected Setup) button, making the installation process easy and quick. Press the button on both devices and the Wi-Fi booster will connect to the router, however, different Wi-Fi signal booster manufacturers might require additional steps.

After completing the setup process, the booster can start working by grabbing the existing Wi-Fi signal and extending its coverage area. The last step would be to connect your devices such as phone, laptop, tablet, and smart home devices, to the Wi-Fi booster. To do so, go into the Wi-Fi settings on your wireless device, click on the Wi-Fi booster’s network name and enter the password (which could be the same as your current network, or you might’ve created a different one during the set-up process). Once connected to the booster, you will be able to enjoy a seamless internet connection in places that otherwise received a poor signal strength.

4.    How do Wi-Fi Boosters Improve the Internet?

Wi-Fi boosters can do more than just improve your Internet by extending your signal’s reach; that is, boosters fill in dead spots which help improve speed. This is because your Wi-Fi signal is directly related to Wi-Fi speed. Therefore, if your signal is strong and reaches every corner of your home, then your Internet performance would automatically improve.

The first and the most basic sign that shows that the booster is working is experiencing better signals in the weak zone and dead zone areas. But, if you prefer a numeric proof, then speed tests are great tools that can be used to check Wi-Fi signal improvements. You can also conduct multiple speed tests- one with just your Wi-Fi connection and the other with the Wi-Fi booster which can identify and show the results side by side.

7.    What is the Difference between a Wi-Fi Booster, Wi-Fi Extender and Wi-Fi Repeater?

The term Wi-Fi booster is a commonly used phrase for devices that extend a Wi-Fi signal, that is now more accurately known as a wireless range extender.

Wireless Range Extenders are independent devices which are located between your wireless router and the location where you want better wireless coverage. It grabs the existing Wi-Fi signal from your wireless router and re-broadcasts it, on a different wireless channel from the one used by your wireless router. The challenge with range-extenders is location, if incorrectly placed, the extender may not obtain sufficient Wi-Fi signal from the router to stream and engage in online gaming or watching a video. To solve this challenge you can hardwire the extender to your router,  to improve the speed of your entire network.

As you know, the further away a Wi-Fi device is from the router, the slower its speed; therefore Wi-Fi Network Extenders can shorten the distance between your devices and the Wi-Fi signal thus increasing each device’s speed and improve performance.

Wi-Fi boosters use the same level of security as Wi-Fi routers that are WEP, WPA, and WPA2. A few years ago a new security protocol was introduced, known as WPA3 that improved the security features within public and private Wi-Fi networks. This new protocol makes it more difficult for hackers to access your wireless network.

Wi-Fi boosters ensure that you get the best Wi-Fi signal/ coverage, internet connection, speed and performance. It’s essential for you to know how to give your Wi-Fi signal a boost, where to use it and when you need it!